by David Driedger | Published 7th July 2016 in Ways of Seeing 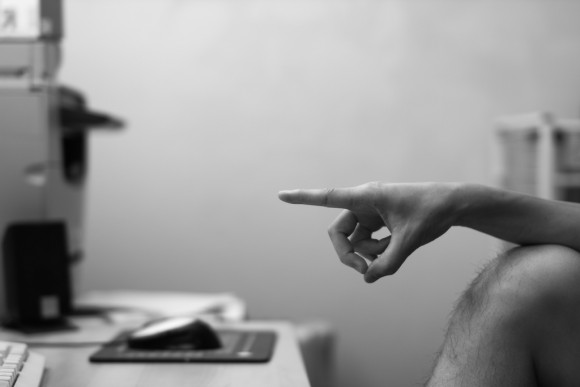 I am struggling with how to talk to my son about racism. As a white person in Canada I have a high level of control over how, when, and if, I enter into the conversation on race. My whiteness is hardly, if ever, noticed. For example, I don’t walk out of my house with people saying, “look, a white!” and while such explicit statements drawing attention to people of colour are less common now, we continue to hear the implied statement in the ongoing issues of murdered and missing Indigenous women, police violence, and prejudicial views on immigration.

In these forms we continue to hear our racism call out, “Look, a native! Look, a black man!” Yancy’s title Look, a White! is a play on psychoanalyst and social philosopher Frantz Fanon’s experience of a white boy call out when seeing him “Look, a Negro! . . . I’m frightened.” This young boy, with no proper “filter,” makes explicit a racism that monitors and maintains boundaries based on supremacist attitudes.

Attempts at addressing racism often focus on addressing the needs of people of colour, which is understandable, but Yancy attempts to give the problem back to whites. Whiteness constitutes that which goes unseen, unmarked, and it can maintain its power unchecked. Even the phrase “people of colour” assumes a transcendent dimension to whiteness, a people of no colour, a people invisible to the issues of race. And so Yancy asks that whites begin to mark themselves in the hopes that we can gain some ground on the tenacious reality of racism.

Identifying whiteness is a task for whites because whiteness itself has functioned as the invisible norm for the West. Quoting George Lipsitz, Yancy asserts that whiteness is “the unmarked category against which difference is constructed, whiteness never has to speak its name, never has to acknowledge its rule as an organizing principle in social and cultural relations.” Look, a White! is a way of marking what has gone unmarked. It “is about exposing the ways in which whites have created a form of “humanism” that obfuscates their hegemonic efforts to treat their experiences as universal and representative.” Non-whites tend to know all about this, they are not the ones wearing invisibility goggles.

Yancy’s book unfolds using lived experiences, personal accounts, and examples from literarature and cinema showing whiteness in contexts where whiteness functioned as the norm. Examples include how white administrators spend their time in hiring interviews with Yancy demonstrating their absence of racism by using Yancy’s body as a confessional as opposed to attending to his intellect and capabilities. Look, a white! He recalls a woman asking him about the practice of white families adopting indigenous children and draws out the implication that if indigenous children might suffer racism in white families doesn’t that mean white children might also suffer from (be formed by) racism in white families? Look, a white!

Yancy uses the example of comedian and actor Michael Richards’s racist tirade in a comedy club as an examples of how the embedded racist ambushes in ways that we would never acknowledge or perhaps even be aware of in other settings. In his apology after the event Richards reaffirms that he is not a racist but that somehow it “fires out of [him].”

As an academic, Yancy often focuses on performing this task in the classroom. In his chapter on pedagogy, Yancy revisits the popular notion of creating “safe spaces” in response to the threat of various prejudices. But even this notion assumes an ability to disengage a space from the forces of individuals. Quoting Zeus Leonardo and Ronald K. Porter, Yancy asserts that “if we are truly interested in racial pedagogy, then we must become comfortable with the idea that for marginalized and oppressed minorities, there is no safe space. . . . Violence is already there.” In this way “safe spaces” become “those that suppress serious and probing questions that interrogate ‘sacred’ boundaries.” Confronting racism means that a space may become more dangerous when something powerful is exposed as abusive, something that once went undetected. A space cannot be made safe in the presence of racism (or sexism, etc.) until the danger of these expressions is manifest to the carriers.

Yancy calls the reader, calls whites, to tarry with the reality of racism. This means not reaching too quickly for hope, not moving immediately to rationalizations, and not hurrying on to action. All of these responses have a place, but if invoked as a reaction they tend to entrench world views as opposed to allow for transformation. Tarrying allows whites to see their indelible connection to structural racism and become more sensitive to how white subjectivity is formed.

I am not excited at the prospect of talking with my son about racism. I am not energized by the work of identifying racism within my family system. I don’t want to spend time working through racist structures in my church denomination. But the very fact that I have these options is an indication (and indictment) of the reality of racism cloaking me with unmarked forms. The phrase is simple but expressing it is hard. Look, a white!