by Will Braun | Published 5th April 2013 in Social Change 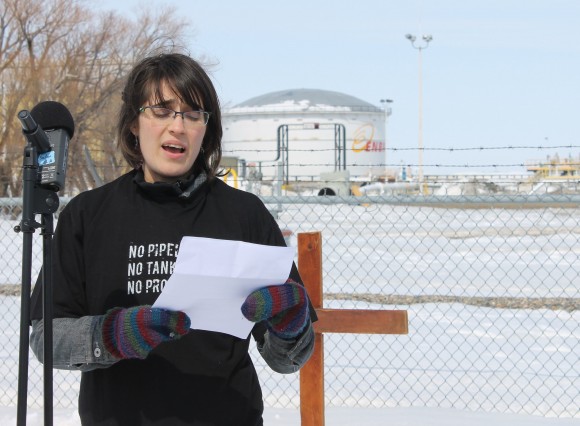 Coral Maloney reads a lament next to an Enbridge pumping station. Credit: Will Braun

The liturgy was as peculiar as the location.

Sixty of us stood in a snowy ditch a mile north of North Dakota. We stood next to an Enbridge pumping station, and directly above six buried pipelines that constitute the largest single conduit of crude oil to the U.S.

The worship leader gave us a rare permission: “Today, we take a step back from our need to fix and solve. We put aside forced optimism. We will not look at the bright side. … We will walk into the valley of the shadow.”

The Holy Saturday event near Gretna, Manitoba, Canada was a service of lament, one of two held along the pipeline that day. It was an occasion to let our souls vent.

As oil coursed silently through the earth beneath us—roughly 80,000 barrels in the short time we were there—we lamented the impossibly daunting reality of climate change.
We lamented the threat posed to indigenous people and lands in the path of the proposed Enbridge Northern Gateway pipeline, a project that would carry oil from the Canadian oil sands to the Pacific Coast for shipment to Asia.

And we lamented our own entanglement in the complicated reality of oil.

Drawing on biblical symbols, we put ash on our foreheads and sackcloth around our arms, as the giant pumps hummed in the background.

Enbridge is a Canadian-based company that operates what its website calls “the largest and most complex liquids pipeline system in the world.”

The March 30 service, which drew people of all ages from a handful of mostly Mennonite churches, was organized by an ad hoc group of people concerned about the Northern Gateway pipeline and climate change. Some of us had collaborated previously on a spirited Earth Day tent revival meeting last year.

The inspiration for this more sombre event came from The Hermitage, a Mennonite-run spiritual retreat center near Three Rivers, Mich.

The wooded part of the 60-acre Hermitage grounds is bisected by a swath of bare land in which Enbridge’s Line 6B is buried. That is the same line that infamously spilled into the Kalamazoo River, about 70 miles from the Hermitage, in 2010, resulting in the largest pipeline spill in U.S. history.

Now the company is planning to replace a 210-mile stretch of Line 6B and increase its capacity from 240,000 barrels per day to 500,000. The $1.6-billion project will require widening the corridor through the Hermitage woods by another 55 feet. An additional work easement will be cleared, though it can be replanted later.

Last July, the Hermitage filed a petition to intervene with state regulators, a move Enbridge lawyers sought to have denied on procedural grounds. Later the Hermitage abandoned the legal path.

“It became really quite clear that [Enbridge] was sure of getting a permit,” said Naomi Wenger. Wenger co-directs the Hermitage and walks the trails through the center’s woods six mornings a week with her dog Ellie.
Her and her colleagues felt that any legal intervention on their part would simply “delay the inevitable.” Lack of resources to hire a lawyer was also a factor.

Instead, the Hermitage board decided to hold a service of lamentation on the pipeline right-of-way and use compensation money received from Enbridge for alternative energy projects. The board also stated that pipeline workers would not be vilified.

The 50 people gathered for that service confessed their participation in the consumptive ways that put pressure on the earth and the atmosphere. They prayed for “courage to use less, demand creative change and care deeply.” They took pieces of a mural that had been cut into strips and tied them around doomed trees.

They read a message of solidarity from our end of the pipeline and we incorporated part of their liturgy into ours, proclaiming our belief that pipelines are not the last word for the land and that there is “good work for Enbridge to do.”

As the group at the Hermitage sang a concluding song about the new day to come, we placed pieces of sackcloth over a cross in the ditch to mark our belief that God walks with us “through the valley of lamentation toward the path that rises toward transformation.”

For me, the service marked an unlikely transcontinental convergence. Last summer I visited indigenous nations along the spectacularly rugged route of the proposed Northern Gateway pipeline on Canada’s West Coast. I interviewed leaders who say the environmental risks are simply too high.

Without exception, they said they will fight the $6.5-billion project in the courts and by standing in front of bulldozers. Meanwhile, Enbridge forges on, straight toward what may be the biggest indigenous uprising in Canada in a generation.

Then I learned that Enbridge would be returning to the Hermitage woods, a place that became a spiritual home for me during numerous visits in the ’90s.

Then I learned that about 12 percent of the oil used in the U.S. flows within five miles of my family’s new farmyard in our quiet corner of Manitoba. That’s a supertanker worth every day, some along the Enbridge lines we worshipped over, and some along the Keystone line, a precursor to TransCanada Corporation’s proposed Keystone XL line.

Pipelines have become hard to ignore.

Even if they are not buried in your backyard, they clutter the news. In the U.S. and Canada they are now the front line in a defining battle. On one side is the presumed imperative of conventional economic growth; on the other, an increasingly desperate push for environmental caution.

Amid this battle it seemed right to stand in the presence of pipes and pumps to lament. It seemed right to draw on religious tradition not as backing for a fight but as a path into the depth of the issue, a depth from which the creative power of change can rise.