I CAN’T BELIEVE IT’S BEEN A YEAR. In some ways I feel disappointed. I’d hoped a year without coffee would somehow make me into a saint. Now, my first cup of coffee in a year is brewing on the counter and I don’t think I’ll be canonized anytime soon.

At the beginning, I said I wanted to do my coffee fast from tax day 2006 to 2007. I love coffee. I was the sort of person who would find a way to have some everyday, no matter what. So I thought going without would help me develop the habit of thinking carefully about my lifestyle and my use of resources. I wanted to put a check on my mind-numbing consumerism.

Now here I am. The coffee on the counter is ready. But I’m not getting up. I’ve been dying for coffee for a year but now I’m hesitating. I hit the snooze button four times before getting up to break the fast this morning. Am I’m afraid I’ll be disappointed?

Actually I’m afraid I don’t deserve it. How could I?

I go to the coffee machine anyway. I hold the cup a long time. The steam condenses on my nose. Maybe I should go outside with it to greet the dawn, rather than sit in front of my computer. That seems more sacred.

Praying over my cup, I take my first sip. I’m thankful. It tastes good, but not as good as I’d imagined. Hardly surprising. But I pray that I won’t forget this year, that I will keep going. I’m still terribly wasteful as a consumer.

I’ve also learned that my disposable attitude toward things – income and resources – has a way of seeping into my relationships with God and people. Do I use people just because they’re convenient? What is the cost I’m willing to pay for such conveniences? But I’m thinking more carefully these days, about everything. Honestly, it drives me batty sometimes. Growing a conscience is painful. But if consumerism is killing me, maybe going without, recycling and redeeming forgotten things will save me.

As the year went on, I felt more and more constricted, trapped and guilty. People told me to give myself a break, give myself a little grace. But what is grace? Just a way to put conscience, ethics and morals on hold while I go on vacation? If guilt is constricting, grace is freedom. I’ve learned that grace is the agent that empowers a centered way of living, rather than a boundary-oriented one.

The whole year I’d been thinking about getting a bike. Rather than just following a whim or trend, I wanted to be sure I could incorporate it into my lifestyle. I finally ordered the bike and it arrived just before the end of my fast. Oddly, by that point I was more excited about the arrival of the bike than about the return of coffee. I had a hunch the bike would lead to new life – one in which I would have to breathe hard and deep while pedaling and fending off the asphyxiation of guilt. The bike taught me what grace is.

I finished my first cup of coffee, went to school to teach a class, came home and made a cup of tea. I had a morning coffee the second day, then a cup of tea in the afternoon. The third day I skipped the coffee altogether. Didn’t want it; wanted tea. Actually, I wanted to go for a bike ride. When did this change from coffee fast to bike riding take place? I feel like I’ve been punked. 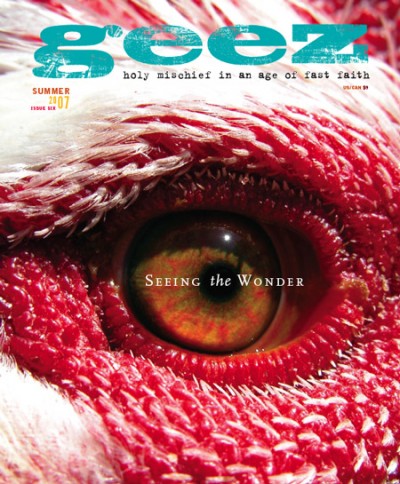