Praying on the Clock: Advent Reflection by Matt Bernico 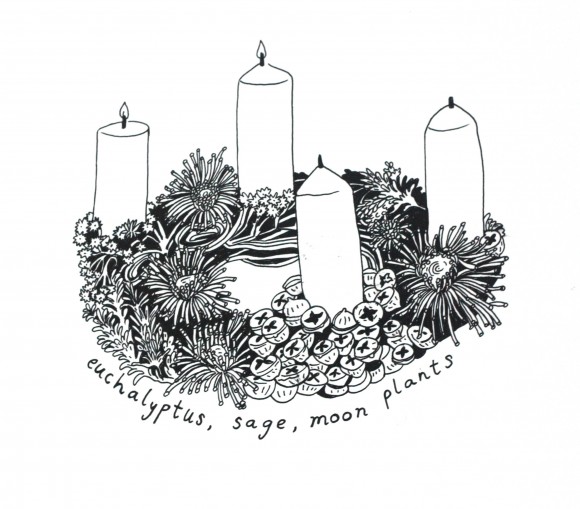 My family recently moved to a new city, starting a new season in our lives. New house, new jobs, and new schools have upset the usual rituals of our Advent season. My son’s preschool is at a private Catholic school. Every morning we walk past the front steps, where we encounter an electric Advent wreath. It stands about four feet high and is comprised of metal lamp posts that house fake, electric candles. Each electric candle is tethered to its neighbor with a bit of garland and purple ribbon. On Mondays, we pass by and notice a new electric candle has been lit. But that’s not the only technological thing about this wreath. Advent itself, along with the rest of the church calendar, is a technology that organizes time. In this tumultuous life moment, my family appreciates the candles marking the occasion. But, I’m worried the electric candles aren’t enough. The traditional reflective nature of the Advent season is good, but will the hyper-active capitalist political economy take notice?

Time is one of those weird things that happen whether or not anyone pays attention to it. Once a moment is counted, it’s already over, and we’re left playing catch-up for the next moment. As futile as that may seem, counting those moments helps make sense of the world. Time is demarcated with any number of significations: ringing a bell, feeling the buzz of a cell phone, the enunciation that class has begun, or clocking in to work. Technologies that delineate human experience into quantifiable moments create meaning within those moments. Advent is a moment in the church calendar where the tension in what time means becomes clear. On the one hand, there are the slow, weekly movements of the Christian community anticipating the birth of Jesus, and, on the other, there is the mania of hyper-consumptive capitalism. Advent is an opportunity for liturgy to reorient Christian life. It’s a moment where liturgy and capitalism are most acutely in tension, and the antichrist nature of capitalism is explicated.

Advent is a break in ordinary time––faces are set forward toward anticipating God’s incarnation. Capitalist time, however, is more universal and abstract. There’s no break––the rhythm is just long hours of work and a bit of leisure. While these technologies of time are starkly different, they have a surprisingly interconnected history. The liturgical calendar of the Church was a technological innovation that Christianized time, giving a Christian sense and order to the Earth’s yearly revolutions. Even beyond the year-long church calendar, medieval monastic Christians, like the Benedictines, subdivided the day and night even further along the lines of their rhythm of prayer. The Rule of St. Benedict, for example, divided the day into quarters marked by prayers with 12-hours between sunrise and sunset.

The daily rhythms of ora et labora, the Benedictine life of prayer and work, is a contrast with the rhythms of agrarian time, which were determined by the hours of daylight. It was out of this tension between ritual and labor that the Christian monastics of Europe adopted the horological, or timely, technologies of Asia and the Middle East to establish time as something abstract from the solar rhythms of farmers and workers. At first, they started with which could precisely tell the time independent of natural markers, like the sun. For the Benedictines, time was a matter of theology and worship, but the industrialization of Europe would repurpose these timepieces from the ritualization of time toward the standardization of time.

When it comes to technology, religious rituals might be the last thing that comes to mind, however, the ticking-tock counting down the hours in the day is a monastic invention. Monastic techniques of time telling through increasingly technical clocks would lay the groundwork for capitalism and wage labor. Wolfgang Ernst, a media historian, writes “The tick of the clock that originated in the monastic order thus returns in the form of the digital computer.” Rather than marking the hours of prayer, the mechanical clock would mark the fragmentation of human life into wage labor and leisure.

Industrialization gives time class characteristics. For the ruling class, time became a part of the equation for calculating the value of a commodity. Whereas for the working class, time became a representation of their life energy materialized into the production of commodities. A wage represented how much time a worker spent on the factory floor––the amount of time their bodies were subject to another’s control. Several hundred years later, time and money have become synonymous. Every minute counts in contemporary capitalism, regardless of whether it’s Advent, Christmas, or Memorial Day. And with the advent of digital technologies, even the eight hour workday isn’t guaranteed. Workers are only ever one email away from work.

The conflict between the Church calendar and capitalist time-management is not an even battle––capitalism has subsumed time itself into its tool-box. Those electric candles will not topple capitalism. But prayer, meditation, and worship are all time-theft to your boss. Praying might seem like the opposite of action––it is literally doing nothing, but maybe that is a practice fitting for a season characterized by overtime and stress. During this Advent, as we prepare for the birth of Christ and the delivery of God’s justice, be sure to say a prayer for your boss, but do it on the clock.