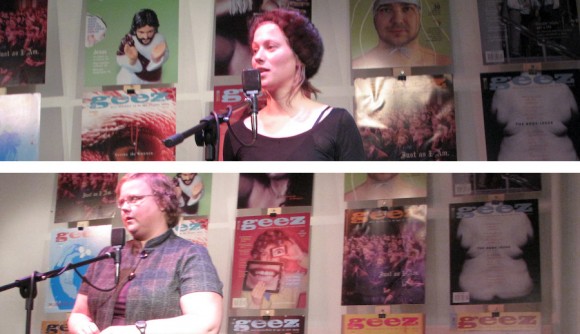 Michelle Elrick (above) and Miriam Meinders at the anniversary party. More photos below

Michelle Elrick, circulation manager, read from her poem “The lower-case letter ‘I’” in Geez 20. Reviews editor and former cabin dweller Kurt Armstrong read from his “To Do” list from Geez 6. Will Braun, former and founding editor recalled the early days and charter board member and contributing editor Miriam Meinders commended the staff and volunteers for their work. Current editor Aiden Enns pontificated extemporaneously on the merits of challenging power imbalances and embodying the light of the world.