by Rachel Barber | Published 17th February 2011 in Experiments in Life 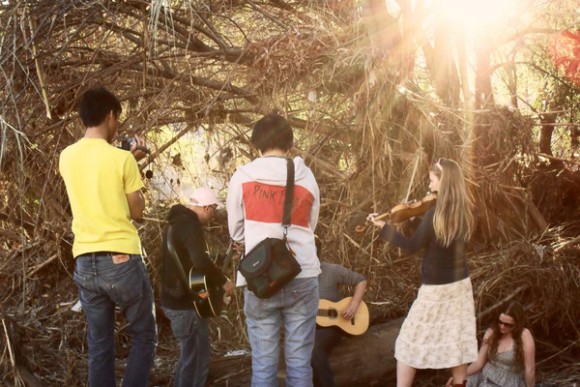 Twin while being filmed by a local college student and filmmaker, Danny L. His documentary on Twin and the Los Angeles river will be released in April 2011. Credit: Eva Klassen

Readers will recall that, in the most recent issue of Geez, we ran a story in the Experiments section on Winnipeg band, Twin, who embarked on a music canoe tour down a well-known Canadian river this past summer. Now, they are taking on a bigger challenge: a canoe tour of the Los Angeles River. Experiments section editor Eva Klassen decided to tag along, acting as a Geez correspondent. This is her first dispatch. If you have a front-line experience that you’d like to share, send it to Experiment at experiments@geezmagazine.org .

Well, Twin is back. This time, they’re taking on the waters of the Los Angeles River. Not wanting to miss out on the action, I decided to join them. I’ll be documenting the journey as well as playing my own music for the opening act of their shows.

What makes this tour especially unique is that the Los Angeles River hasn’t always been acknowledged as such. When explaining the canoe tour, many people respond by asking, “What river? L.A. has a river?”

Most people recognize the waterway as a canal – an enclosed, cemented portion of the city that moves water quickly from a large watershed covering 843 square miles down into the Pacific Ocean. In July of 2010 the federal designation of the river was changed to navigable by the Environmental Protection Agency.

Even with this change of designation, the numerous municipal jurisdictions through which the river passes have not come to an agreement on how people are allowed to use the river.

If authorities see anyone in the river, they have strict orders from the Parks and Recreation leg of the municipal government to pull them out.

David Fort, front-man of Twin, and the rest of the band met with Los Angeles city councillor Ed P. Reyes, who is a strong supporter of cleaning up the L.A. river with long term goals of making it safe and accessible to residents. David hoped to gain political support in order to create an avenue to deal with police, if any problems occur.

The city of L.A. does allow people to be on the river if they have a film permit, allowing them access to the river while filming is taking place. Following this avenue may be the only way we can legally get on the river and complete the tour.

David Fort and band mate, Lesley Brown, have worked tirelessly for the past four months organizing the tour. They have planned exit and entry points, scouted the river and researched the history of the river and the regulations surrounding it. Their hope is that, in the future, the river will become accessible to everyone in the city. The Los Angeles River should be a clean, healthy gathering place for people to enjoy nature and get away from block after block of concrete and cars. Stay tuned – the tour officially kicks off Friday, February 18th and I’ll fill you in on Twin’s Urban Seed Bank Initiative and the Elder’s Project.

Eva Klassen is the Experiments section editor for Geez.