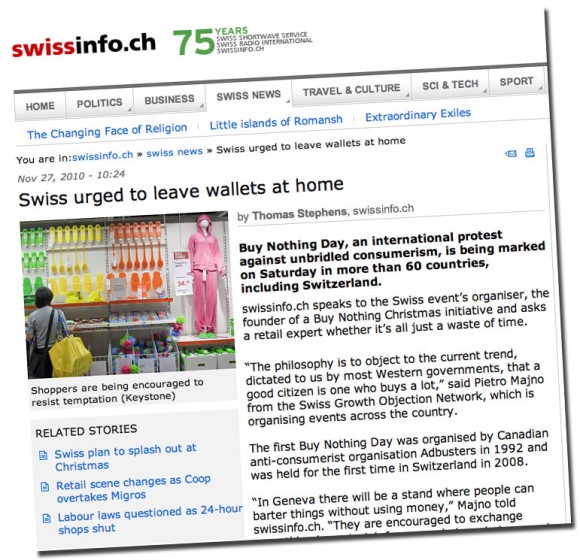 Each year since a group of us started the website Buy Nothing Christmas in 2001, I get requests for media interviews. Just before Buy Nothing Day a Swiss journalist wrote and asked for some comments.

See the story Swiss urges to leave wallets at home, by Thomas Stevens.

“In Geneva there will be a stand where people can barter things without using money,” Pietro Majno told swissinfo.ch. “They are encouraged to exchange something immaterial, for example knowledge, good experiences – you could exchange a list of your ten favourite books for a list of ten favourite films or walks.”

Fyi, here are the comments on Buy Nothing Christmas:

Aiden Enns took the “buy nothing” concept a step further and in 2001 launched a campaign with fellow Mennonites – a Protestant faith with historical roots in Switzerland – for a Buy Nothing Christmas.  “I’m disturbed by a society-wide agreement to over-shop, especially in December. In Canada and the United States, shopping has become a leisure activity and an obsession, which is legitimised in our gift-giving rituals,” the Canadian founder of Geez magazine told swissinfo.ch.

“When I was working at Adbusters in 2001, I saw how successful the Buy Nothing Day campaign was, and thought it should be rolled out for the whole Christmas shopping season,” he said.  “Also, because I’m a Christian, I wanted to make a statement that not all Christians celebrate excessive consumption in the name of their religion. It’s absurd to shop at toxic levels in the name of the child that was born to bring peace to the world.”

Solidarity and hope
Enns acknowledges that despite his views he still buys something almost every day.   “This astounds me. So on Buy Nothing Day I can pay attention to this contradiction and strengthen my resolve to live differently,” he said.  “Plus, it gives us a sense of solidarity and hope, that consumerism need not be the reigning social practice. Maybe care for our neighbours and the earth’s resources can be our orientation. I hope so.”