by Tim Nafziger | Published 2nd March 2015 in Experiments in Life 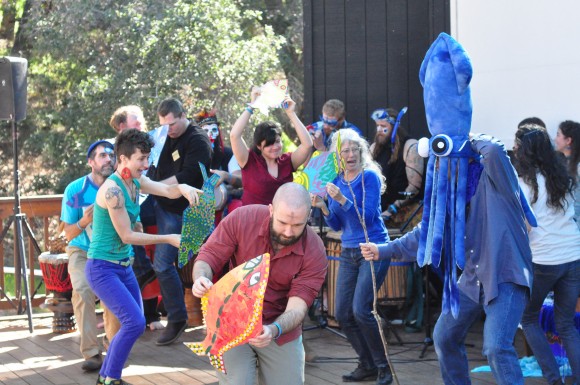 The Holy Mackerels and the Arch Squidship dance to the music of Carnival musicians as part of the Carnival de Resistance’s water show at the Festival of Radical Discipleship on February 18, 2015. Credit: Tim Nafziger, https://flic.kr/p/rm4eNY

Radical Discipleship: Seven communities that have shaped my journey as an Anabaptist

From February 16-20, 2015, I was immersed in the Between Seminary, Sanctuary, Streets and Soil: A Festival of Radical Discipleship. The gathering featured over 80 presenters from communities around the U.S. Their stories of radical discipleship inspired me to put together this primer of seven communities that I have visited and interacted with over the past decade. Each of them were represented at the Festival.

Joyce and Nelson Johnson have lead the Beloved Community Center for over 20 years based on the vision and mode of Dr. Martin Luther King and inextricably rooted in the Greensboro, North Carolina. When I visited their community for in June 2011 I sat in on their “Wednesday table” where BCC staff and interns sit down with supporters and fellow organizers from the community to talk about what’s going on. I also joined one of the Bible studies and worship services that are a foundation of the centre’s life and work.

Their organizing work includes police accountability, economic justice, environmental justice, and community organizing. They see themselves as a “levelling place” for people from different racial and economic groups around the city of which 30% is African-American, 40% is white, and 30% is other (Latino, Asian and others). They were also instrumental in organizing the Greensboro Truth and Reconciliation Commission, which looked deeply into the November 3, 1979 Greensboro Massacre. Five members in an anti-Klan protest were killed by the Ku Klux Klan and the American Nazi Party. Nelson Johnson was one of the leaders of the march and his 2011 account of the event includes footage from the massacre itself taken by news crews at the time. You can see the video here.

The Carnival de Resistance flows out of the prophetic vision of Tevyn East and Jay Beck in conversation with many scholars, activists, and artists. In its residency form, it involves week-long convergences complete with nightly performances, a bicycle powered sound system, and a carnival midway. Sarah Thompson, Christian Peacemaker Teams executive director and CdR member, describes how the experience impacted her:

“As a theologian and scholar-activist, I loved sharing circus theology and inviting the curious and the apathetic, the annoyed and the skeptic, into our whirling-twirling experiment of life together under the shelter of God’s big tent. I revelled for the month in the space; a space that by God’s grace and Earth’s sustenance held all manner of creatures, odd connections, swirling energies, and hard questions. Even though we as individuals did not have the answers to many of the questions that arose from our troupe and the local audience-participants, we COULD gain collective wisdom or flashes of insight by putting them into holy PLAY and embodied conversation through the performance of old stories and the community practices of returning to ancient pathways.”

You can read her own article in which she goes on to describe the Carnival as an experiment in recovery from and resistance to white supremacy.

This “protestant Catholic Worker” community has been working “to resist war and violence and nurture community” for 33 years in Atlanta, Georgia. They focus their advocacy on the homeless, poor, and prisoners, particularly those on death row. Terry Kennedy was one of their presenters at the festival. His article in the October 2013 issue of their Hospitality newspaper inspired me when I visited the community in November 2013. Terry wrote about the painful experience of coming out in that publication a few months earlier:

“The May issue of Hospitality had carried my article “On Being a Black Gay Man,” and it was from this that many people, including our friends from the streets, found out that I’m gay. Even though it was incredibly liberating to come out of the closet and finally accept myself for who I am, I was terrified that others would not accept me as those at the Open Door had done.”

Terry’s courage and commitment to the work of Hospitality is an inspiration. I also was impressed with the van load of community members they brought to the annual School of the Americas Watch vigil outside the gates of Fort Benning, Georgia. Reconciliasian is a project of Mennonite pastors Hyun Hur and Sue Park-Hur that offers seminars and training in peace and justice to the Korean community in the Los Angeles, California area. Their work flows out of their understanding of peace as the centre of the gospel. The history of bitter conflict between North and South Korea can make it difficult to discuss these themes in Korean churches.

In a recent blog piece, Sue explored a challenging with the L.A. police that raised difficult questions for her around racism. At the Festival of Radical Discipleship she described what it was like to be a college student in the Korean-American community during the Los Angeles riots in 1992 when widely circulated news images and articles showed Korean store owners protecting their stores with guns. In her blog post she concludes with this analysis:

“Iris de Leon-Hartshorn, the director of Transformative Peacemaking of Mennonite U.S.A commented that we cannot ignore the dynamics of internalized racism. People of colour hear the same messages about themselves and other groups.”

Located in Minneapolis, Minnesota, this is a community that brings together the Catholic Worker and Mennonite traditions. This has been a precarious fusion at times. The radical hospitality and resistance work they do is not always understood well by the more traditional Mennonite churches in their region, but continues to challenge the Anabaptist tradition. In July of 2013, CNN featured their Fourth of July worship service:

“The annual service is ‘a sort of anti-patriotic holiday,” says Mark Van Steenwyk, whose community focuses on simplicity, prayer, and peacemaking. Singing “The Star-Spangled Banner” is out. Reflecting on the contradictions between the gospel and the American Dream are in.

“We thank you, O God, for the good things we enjoy in our lives,” reads a prayer the Mennonite community recites each year, “but lament that our abundance has brought destitution to sisters and brothers throughout the Earth.” Tom Airey and Lydia Wylie-Kellerman edit RadicalDiscipleship.net, which features stories from Radical Discipleship communities around the countries. They are both members of the Jeanie Wylie Community. Members of the community have a long history along Larkin street in Detroit, Michigan, where they have recently become involved in the struggle against water shutoffs of Detroit residents. Here’s how Bill Wylie-Kellerman, Lydia’s father, describes the situation:

“But in Detroit, under emergency management, as many as 150,000 homes are threatened with shut-off, up to 3,000 per week, largely by private contractors. People, including children, the elderly and infirm, wake up in the morning to find themselves unable to drink, cook, wash, or flush toilets. In fact, two thirds of these homes are occupied by children. People without water fear losing their children to protective services. They can be driven from their homes, their neighbourhood, their city.” – from Organizing to Stop Detroit Water Shut-Offs

Lydia is working with a local organizing committee to plan a Word and World: Water and Land School this summer from July 15 to 19 that will go deeper into these issues in conversation with indigenous and hip hop communities. In 2011 and 2012, my wife Charletta and I participated in Word and World’s mentoring program, which was how we connected initially with some of the communities in this article. In the early 2000s, World and World hosted a series of People’s Schools that brought together scholars, activists, and clergy.

As we continue to explore what it means to follow the radical path of Jesus in our lives, these communities are concrete testimonies to the different manifestations of the spirit of shalom. Each of these communities has spoken into my journey as a radical Anabaptist. What communities would you add to this list?

Note: Special thanks to Chris Wight, Raquel Jensen, Elaine Enns, Ched Myers, and the other Bartimaeus Cooperative Ministries staff for all the work convening, organizing, and hosting the Festival.

Tim Nafziger is an Anabaptist writer, photographer, and web developer who lives in the Ojai valley in California. Tim’s vocation is cross-pollination and working with small groups of people committed to social change.

Images:
1. ReconciliAsian: Sue Hur uses her photo collages to keep supporters up to date on the work of Reconciliasian on social media. This image shows photos from a presentation that Hyun did for Radical Journey and DOOR Hollywood in August of 2014. You can see their full blog post on the event here. Photo courtesy Sue Hur.

2. Jeanie Wylie Community: A Word and World gathering in the back yard of one of the Jeanie Wylie community houses on Larkin Street in April 2011 as part of a year long mentoring program. Photo by Tim Nafziger.