by Aiden Enns | Published 6th September 2014 in Ways of Seeing 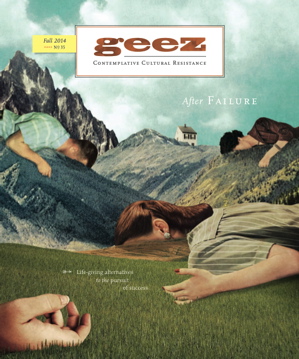 I’m actually somewhat embarrassed about our next issue of the magazine. We tried to make it cheery but couldn’t really pull it off. After all, the topic is failure.

Usually failures are seen as steps on the road to success: The business person welcomes failure as a move toward progress. The optimistic activist will spin failure as a lesson on what not to do or as evidence that we haven’t given up.

It is very hard to get beyond the dual options of success or failure.

With this issue we admit failure and then seek to change the rules of the game, to invent new goals that don’t compute with the success-failure program. This issue is called, “After failure: Life-giving alternatives to the pursuit of success.”

“Normal notions of success are elusive by design,” we write in our dramatic opening pages. “Let’s act as if typical ambitions are bankrupt and take the narrow road that brings physical invigoration, a sense of meaning, [and] and positive social interaction.”

For example, we have fourteen, “failure stories.” These are often full-page portraits of individuals who identify as failures.

“My failure is a failed marriage,” writes a young woman, bruised after an 8-year union with her husband. “If I cannot make a relationship work despite my best efforts, will I fail at everything?” she asks.

A good life is not easy. Period. But it’s worth it.

A Mennonite feminist (yay!) blogger, Hannah Heinzekehr, discloses her “feminist fails.” How can she be into queer theory and still pay to see the latest chick flick, and find it entertaining? She embraces her inconsistencies.

On a more meta scale James Wilt offers a feature interview with Paul Kingsnorth, co-founder of the Dark Mountain Project. After a decade of enviro-activism, Kingsnorth admits that we’ve failed to “save the earth.” He’s abandoned that goal and now seeks to live into a post-civilizational world. Weird? Defeatist? I find it strangely inspiring; the honesty is contagious.

So, why did we do an issue on failure? Because we want to offer solace to ourselves and others who either chose to fail or failed to succeed. And we want to suggest that dominant notions of success (think of almost any Hollywood movie, popular song or well-known person) are misdirected and even premised upon other people’s failure. There are collective and inclusive alternatives to success; while they may not be glamorous, they are achievable and sustaining.

For example, here are five strategies for approaching failure:

1. Admit you’re a failure.
Once you realize it’s not avoidable it has less power over you. In his article, “Failed Nations,” Will Pearson writes that failure becomes a source of strength in the Hebrew scriptures.

2. Quit the pursuit of success.
Go for small, quit your overseas assignment, drop out of grad school. This sounds like counter-intuitive advice, but it’s life-giving for Gary Conway, Elizabeth Jennings and Suzanne Maryse Pringle, respectively.

3. Save the world with failure.
Okay, this mostly a joke. But Will Braun writes how the Christian faith is founded by a failure, and comic artist Justin Petkau presents an image of God that fails eternity’s marketing team.

4. Change your relationship with mainstream society.
Tatiana Fajardo-Heflin hunkers down in a so-called abandoned neighbourhood; Sandy Malasky shuns the “look young for life” mantra and embraces her aging body.

5. Reframe failure as a good thing.
Peter Fergus-Moore visits a community in Palestine; he witnesses peace activists at Christmas bring a Santa suit to a demonstration in front of Israeli soliders. The action seems futile yet still worthwhile.

Watch for the “After failure” issue in your mailbox or on the newsstand in the next week or two. Or order online at geezmagazine.org/store.