Day 1 report - Veggies with my vegetables,  made radio appearance 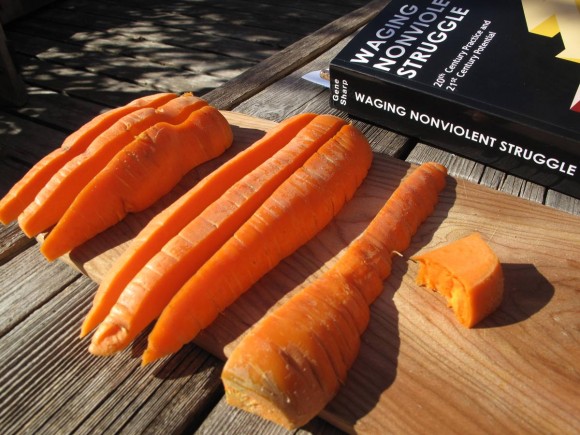 A mid-morning snack, while preparing for class. Credit: Aiden Enns

Okay, so I asked an organizer if I need to count food from our family garden as part of my living on $4 a day.

First he congratulated me for growing our own food. Then he said it was okay to include home-grown fresh produce, and not make it part of the daily expense.

And, because he’s looking ahead to the end of the week when I will join others for a talk at the public library, he said “your you can consider this a part of your story/message as a living book.”

(That’s right I’ll be a “living book” at the library. If people want to hear my story, they have to “check me out” and ask me questions. Then I engage them in discussion on food, hunger, privilege, etc. for up to 15 minutes. It happens on October 16 at the Millenium Library, see announcement here .) 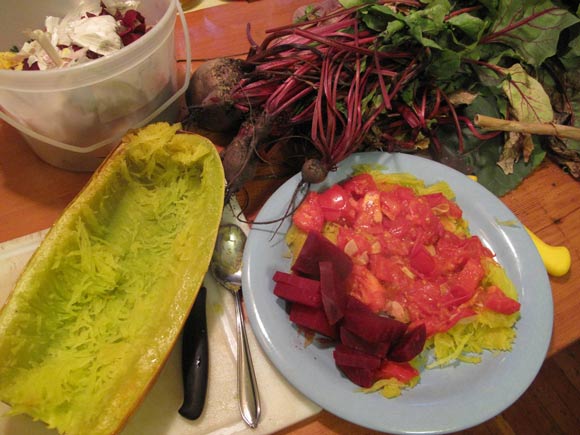 11:30 a.m. Three big carrots, dug yesterday from the garden, still had tops on them and sticky dirt on the sides. I scrubbed the dirt off first and them lengthwise so it felt like more.

2:30 p.m. Cup of hot water at university where I co-teach a class on nonviolent social change (cool, eh?). I was tempted to grab some free coffee that was just sitting there.

4:45 p.m. Tempted to grab Oreo cookies and pretzels lying on a table by a sign, “Free.” But again, I resisted, thinking it’ll count to my $4, but I might change this rule. Ate a carrot instead (yay, he says sarcastically). Actually, I did think of the cookie as pure sugar with a bit of fat, and that I’d get a short buzz and then feel even more hungry. The carrot was boring but “better” (the quote marks represent my deep Puritanical superego).

5:15 p.m. On the local CBC radio for about 10 minutes. I joined a friend and co-organizer and was interviewed by Larry Updike. Kicking myself now because I lost my bearings—I want to be critical of how much food people like me have, I want to be critical of the organizers for not profiling actual poor people, I want to be in greater solidarity with people on welfare. Instead? I talked about the carrots from our garden and how people were trying to give me food for free. Missed opportunity. See my critical questions in the tail end of this earlier post.

7:00 p.m. Big meal: oven-baked spaghetti squash (from the family garden in the country), cooked beets, cooked carrots, and fried garlic (2 cloves sliced, came from the store, approx. 50 cents?) with tomatoes (from our garden on our property, see how rich we are!). I used about 2 tablespoons of olive oil (one for the squash, one for the garlic).

The plate was heavy with vegetables. It was wonderful, some citrus flavour came out of somewhere, the tomatoes? I appreciated the food. Indeed.

Forty-five minutes later I had another helping.

“It’s a very confining feeling,” I was thinking. “…Not being able to eat what you want.” I was craving something sweet for dessert, or a coffee, or a glass of wine.