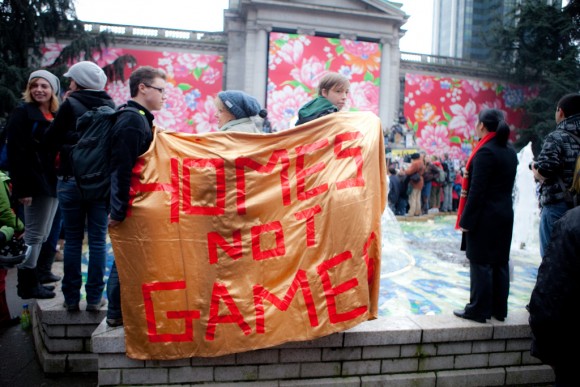 Slagging on the Olympics is a good way to make people think you’re a kook. Nobody likes a party pooper, especially one at a worldwide pageantry that’s bringing 82 nations together in peaceful competition. It’s definitely not in keeping with the nebulous concept of “Olympic Spirit,” which is, let’s face it, only rich in sentiment.

Nevertheless, such sentiment serves as a convenient rallying cry for corporations that stand to profit from the rapacious development of Olympic venues and public consumption of events, schwag and advertisements. It’s a feel-good moneymaker.

Corporate fingerprints are all over these games. From the iCoke.ca torch relay “bringing communities throughout Canada together” to decorated speed skaters shilling for McDonalds, the Olympics has become a platform and playground for the wealthy.

The Government of Canada is also using this Olympic Spirit to cloak soft-nationalism. It’s about pride. “Own the Podium“ is a gaudy $118 million project (complete with $20,000 bonuses for winning athletes) to erase some of the “embarrassment” of having failed to win a gold medal in the 1976 Summer Games in Montreal and the 1988 Winter Games in Calgary. The Seattle Times calls this Canada’s “non-nuclear Manhattan project.“

All told, the cost of these Olympics is in the neighbourhood of $6 billion. That’s an expensive spectacle. And while we watch more than 2,600 athletes compete, over 2,000 people remain homeless in the Greater Vancouver Area alone. As for the causal connection here, I cannot speculate. But it’s an interesting numerical correlation that points to a problem with priorities in interests and spending.

The rising tide of Olympic riches hasn’t helped the displaced homeless. Property values have risen while low-income housing has decreased. But pay no attention to the poverty and drug abuse on, say, East Hastings. Instead, feast your eyes upon and wave at the torch-wielding Wayne Gretzky, riding in the back of a pickup truck. The man scored over 2,000 NHL points for goodness sakes. That’s one for every homeless person and then some.

This is the elephant at the party, and it’s one that has a habit of turning white after the closing ceremonies.

But there are people making noise over this corporate and governmental duping. Groups like No 2010 Olympics on Stolen Native Land, the Olympic Tent Village, 2010watch, and the Poverty Olympics are giving voice to concerns over headlong development, public debt, corporate invasion, police state encroachments and ecological destruction.

As the rest of these games unfold, consider what the Associated French Press once defined as the “real” Olympic spirit:

“True Olympic spirit is often found away from gold medalists with their agents and sponsorship deals – it is found in its purest sense in those that come last.”

Those coming in last, though, are not the athletes.