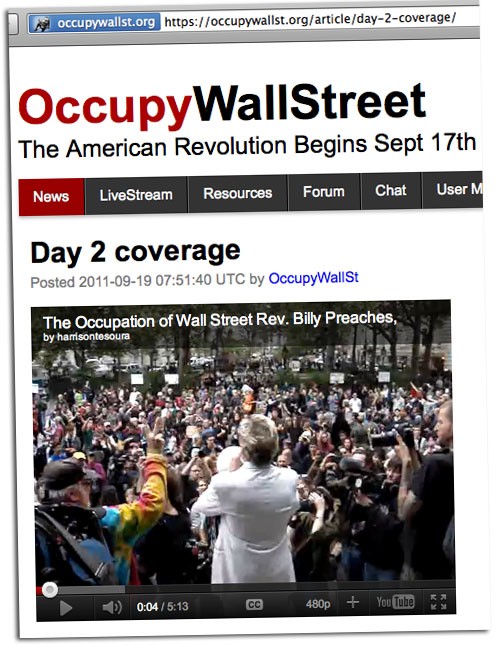 This past week, readers of Adbusters magazine and others gathered on Wall Street to protest the concentration of so much wealth in the hands of so few.

Preaching to a crowd on Wall Street, our friend and actor pastor to the activist world, Reverend Billy held forth with his trademark funnel megaphone and white tuxedo on September 18, day 2 of the protest (hear a not-so-clear video here )

Adbusters founder Kalle Lasn and and writer Micah White wrote an opinion piece in The Guardian on Monday September 19. They report that “Three hundred spent the night, several hundred reinforcements arrived the next day and as we write this article, the encampment is rolling out sleeping bags once again.”

Lasn and White hope to build on growing unrest and protests around the world:

“There is not just anger. There is also a sense that the standard solutions to the economic crisis proposed by our politicians and mainstream economists – stimulus, cuts, debt, low interest rates, encouraging consumption – are false options that will not work. Deeper changes are needed, such as a Robin Hood tax on financial transactions; reinstating the Glass-Steagall Act in the US; implementing a ban on high-frequency ‘flash’ trading. The ‘too big to fail’ banks must be broken up, downsized and made to serve the people, the economy and society again. The financial fraudsters responsible for the 2008 meltdown must be brought to justice. Then there is the long-term mother of all solutions: a total rethinking of western consumerism that throws into question how we measure progress.”

Why do so few sermons in conventional churches mention the economic crisis? Street preachers and bouncing placards carry message of outrage, lament and hope. Contrary to mainstream detractors’ views, nonviolent demonstrations are an important step in bringing about social change. When unrest is expressed, then analyzed and articulated, a populace can put words and ideas to its discontent. It can recognize a bad situation, and, moreover, chart steps for change.