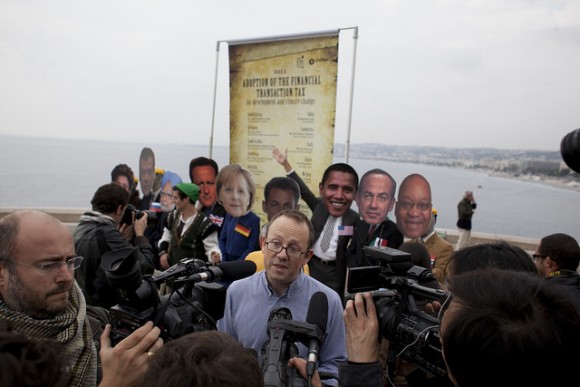 Geez correspondents and World Vision’s global justice advocates, Chris Derksen Hiebert and Sharon Marshall are at the G20 in France to uncover why anyone should care about this kind of hyped-up power showcase. Here’s what they had to say about how the intense focus of the media on the Greek referendum illustrates the issues of faith and social justice tied to the summit.

As we entered the press centre on the yacht-littered Cannes waterfront we got an official agenda for the summit. The list of issues in it that directly affect the poor is long—development, financial systems regulation, trade protectionism, food security policies, transparency and regulation of food and commodity markets, corruption and tax havens, global governance and the social dimensions of globalization and others—all great reasons to pay attention this week. But after one day in the media centre here, it’s pretty clear that not much other than the Euro-zone crisis and the Greek referendum will make it to any meaningful public or leaders’ debate.

Without question this is frustrating. Why can’t at least some of the 2,000 information gatekeepers here move their focus to broader issues, even momentarily? On the other hand, the media focus is so strong because, much to the consternation of EU leaders, the Greek government has announced a referendum to allow the people most directly affected by the crisis to have a say in what it will do. Whatever the reasons Greece has found itself in this situation, giving people a voice is very positive and media attention is warranted.

The “voice” that we’re most concerned about—that of the poor in the global south—is sadly lacking here. As a result, billions of people directly affected by the G20 leaders’ decisions won’t have a voice in these proceedings. Of course, this is why we are here, along with World Vision and other NGO colleagues who are actually from the south. We’re fighting to draw attention to the realities that kill more than seven million children a year before the age of five, realities that the G20 can and must address.

As people here talk about the Greek referendum and how common people there have pushed their way into the highest levels of decision making and power, my mind is drawn back to Matthew’s accounting of that moment the curtain of the temple was torn in two from top to bottom. To me, that is both symbolic of our direct access to God and of God’s rejection of elite human power and control over that access. As I understand it, seeking justice should be the same as trying to build God’s intended kingdom here on earth today and Matthew reminds me that this includes ensuring regular people having access to power.

The developing world didn’t make the financial crisis, they have little access to the decisions that will be made to address it, but they will be the most harmfully affected. We have to push the G20 leaders to show us they are able to walk and chew gum at the same time. They must be able to address the issues in Europe and the rich nations and at the same time, provide greater leadership to tackle the global issues of development and food security and ensure that the voices of the poor are taken into account as they make those decisions.